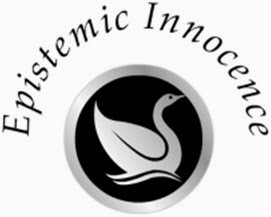 Today I want to introduce one of the projects we run at Birmingham, the Epistemic Innocence project. It investigates the potential epistemic benefits of imperfect cognitions, that is, cognitions that are factually inaccurate in some key respect. Imperfect cognitions include delusional beliefs, distorted memories, and confabulatory explanations in the clinical and non-clinical population. It is currently funded by a 12-month AHRC Fellowship awarded to me, and it also features Ema Sullivan-Bissett as a research fellow.
Some false beliefs can be pragmatically beneficial. For instance, falsely believing that I’m a great public speaker will make me feel better about myself and give me self-confidence next time I need to stand up and talk in front of a large audience. But it is really counterintuitive to suggest that beliefs that are false can be good epistemically, that is, bring us closer to the truth. Usually, false beliefs are dismissed as epistemically bad. In the project we want to see whether they can have redeeming features, despite their epistemic faults.
Our contention is not that imperfect cognitions are epistemically good, but that they can gain some sort of epistemic innocence, if they meet the following two conditions:
1. Epistemic Benefit. They deliver some significant epistemic benefit to a given subject at a given time, that is, they contribute to the acquisition and retention of true beliefs.
2. No Relevant Alternatives. Alternative cognitions that would deliver the same epistemic benefit are unavailable to that subject at that time.
What does it mean that other cognitions are not available? In general terms, there may be no genuine alternative to an imperfect cognition, because information that would lend support to a different, more accurate, cognition is opaque to introspection, not open to investigation, irretrievable, or blocked for motivational reasons; or the alternative cognition could be strictly speaking available, but it would not carry the same epistemic benefit as the imperfect cognition.
In order to establish whether cognitions are epistemically innocent we need some good old conceptual analysis, but we also need to be empirically informed about how such cognitions present themselves and how they interact with other cognitions. That is why we have created a network of researchers at different stages of their career and from different disciplinary backgrounds, but all interested in imperfect cognitions broadly conceived. We exchange ideas via a group blog, called Imperfect Cognitions, where we comment on each other’s ideas, report on relevant conferences, and present new books.


The themes of the project will be explored in a two-day workshop at the University of Birmingham, entitled “Costs and Benefits of Imperfect Cognitions”, to be held on 8th and 9th May 2014. The workshop will be one of the means by which the Epistemic Innocence project interim results are disseminated, and will promote exchange between philosophers and psychologists on the potential pragmatic and epistemic benefits and costs of beliefs, memories, implicit biases, and explanations. Speakers include the project team (Ema Sullivan-Bissett and myself at the University of Birmingham), and then Katerina Fotopoulou (University College London), Martin Conway (City University London), Ryan McKay (Royal Holloway) and Maarten Boudry (University of Ghent), Miranda Fricker (University of Sheffield), Jules Holroyd (University of Nottingham), Petter Johansson and Lars Hall (University of Lund).