Project PERFECT wants to promote further investigation into whether false or irrational beliefs can be advantageous. Can such beliefs be biologically adaptive, enhance wellbeing, be conducive to the satisfaction of epistemic goals, or promote some other form of agential success?

In the existing psychological literature, self-deception, positive illusions, delusions, confabulatory explanations, and other instances of false belief have been shown to be beneficial in one or more ways. However, in the philosophical literature, there has not been yet a systematic study of the role of false beliefs in supporting different aspects of human agency. We are organising a workshop which aims to fill this gap, PERFECT 2016, a workshop on False but Useful Beliefs (see link for a full programme).

Speakers will consider different types of beliefs that have an important role in supporting human agency. Some beliefs make us feel better about ourselves and even enhance our health prospects (e.g., positive illusions); some provide some explanation for very unusual experiences (e.g., clinical delusions); some protect us from undesirable truths (e.g., self-deception); some help us fill existing gaps in our memory (e.g., confabulation); some support a sense of community that improves social integration (e.g., religious beliefs).

The workshop will encourage a reflection on the relationship among the different types of benefits that such beliefs can have and on the different aims and functions of beliefs. Registration is now open! The workshop will be held at Regent’s Conferences in central London on 4th and 5th February 2016. Keynote speakers include Anandi Hattiangadi, Allan Hazlett and Neil Van Leeuwen.

Please go the University of Birmingham online shop to register as places are limited.

Posted by Lisa Bortolotti at 19:21 No comments:

On Emotions (a conference report) 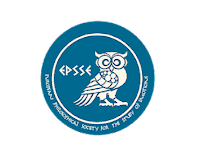 In this post our PhD student Isaura Peddis reports from the second annual conference of the European Philosophical Society for the Study of Emotions (EPSSE).

The EPSSE is a young not-for-profit organisation, which was born to satisfy the demand for a deeper understanding in the subject of emotions and give a chance to those who, like me, are interested in this subject to connect together and share ideas.

I had the pleasure to attend the conference as a member of the audience and as a speaker. The number of speakers and the quality of their work, made it difficult for me to choose what talks to attend. Among all the talks available the ones that I most enjoyed, due to the nature of the topic, were those by Sonja Rinofner-Kreidl (“The challenge of forgiveness: Shallow and Deep, Moral and Non-Moral”), Laura Candiotto ("Aporetic State: The Shameful Recognition of Contradictions in the Socratic Elenchus") and Christina Werner ("How can we be moved by the Fate of an Abstract Artefact? Created Non-spatial Entities as Intentional Objects of Fictional Emotions").

I presented my paper, "Aristotle and his Archetypal Classical Cognitive Theory of Emotions: a Philosophical Myth", during the second day of the conference. It was a big surprise for me to discover that my paper was selected to be presented during the section dedicated to ancient philosophy. When it comes to ancient philosophy, I consider myself to be an amateur who has a soft spot for the ancient Greek philosophy; therefore it was an honour to have the opportunity to share my ideas with those who not only share my passion but also are competent in the topic. In my paper, I argue that Aristotle cannot be considered a cognitivist; my assertion is based on the analysis of passages where Aristotle sketches out the passions and those where he outlines the sensitive faculty and determines that, inside his philosophy, the body, together with the cognition, has a role in the arousal of emotions. 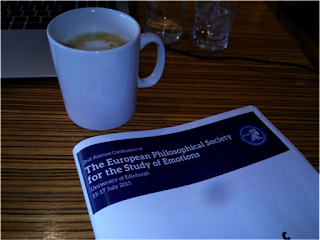 The annual conference is not the only occasion where the members meet. In order to encourage the interaction between its members, the EPSSE, runs workshop all year round. The two upcoming for the next year are “Love and Time” that will take place in Israel in March 2015 and “The meaning of Moods” that will be held in Basel in December 2015.

Athens is the city chosen for the third annual conference in 2016, therefore, Aristotle, wait for me at the Lyceum and I will share with you my ideas!
Posted by Lisa Bortolotti at 19:50 No comments: